On Tuesday, Renee and I set out for Clanwilliam. Mags travelled with us and we were looking forward to meeting the rest of our walking companions at the Clanwilliam Lodge. They were Ian and Christine, Julian and Tricia, John and Carol, Colin and Anne, Mick and Jenny, and David and Lynette.

After a welcome by the tour organiser, Michelle, we had a somewhat hit and miss dinner – some of us had finished our food before others were served. It was not a good start and the wine list summed it up perfectly – there were only four red wines listed, but three of them were not available. The wine list’s description of it’s house red was a classic!!

Fortunately our rooms were comfortable so we all had a good night’s rest before being picked up after breakfast and taken to the top of the Pakhuis Pass, from where we started our hike. We were blessed with wonderful weather and luckily the forecast of very hot days held off. The scenery lived up to its promise and new sights and ever-changing rock formation greeted us around every corner. John Mountain was our guide on the first day and he proved to be very competent and was always on hand to encourage us and ensure that we kept our spirits high.

The latter were flagging somewhat as we reached the end of our 16km hike and had to descend along a steep, but rather poor track with encroaching vegetation. Colin was finding the descent difficult and Mick had his share of problems with a very sore back and hip, but neither complained. This part of the walk was at odds with the first 14 kms, which were very well maintained, with well constructed steps and relatively easy gradients.

We eventually reached our destination – the Krakadouw cottages – all very tired and ready for an early night after our dinner which was delivered. The accommodation was simple but quite comfortable, although some had to share rather intimate ablution facilities.

We were due to depart at 7 am on Thursday morning for our walk to Heuningvlei, but the residents of “Oorkant se Huis” had other ideas. We eventually went to see what was holding them up, only to find that they had decided to have a late lie in, followed by a leisurely cooked breakfast, whilst the rest of us stood around waiting!!

Barend was our guide. He was quieter that John, but very competent and knew the trail intimately, having covered it hundreds of times! It wasn’t long before we saw fresh leopard spoor on the sandy portions, but we were not lucky enough to see who had made them! We were soon settled into a steady climb to the high point of the trail, some 900 metres higher than the starting point. A surprising sight along the route was the old Boer War block house and we wondered how effective it could have been in such rugged territory. For the first half of the walk we were lucky to have a stream close at hand and were able to cool off in the shade of yellowwood trees and replenish our water bottles with it’s cool clear water.

Unfortunately, we had lost three of our group for this leg of the hike. Colin, Anne and Mick did not feel up to the climb which faced us, so they got a lift back to Clanwilliam, where Mick picked up his car and drove the circuitous route to Heuningvlei. This had its advantages, as they were able to restock with some much-needed beverages along the way, thereby ensuring that we could slake our thirst on arrival. The latter was essential as the second half of the route was without water and our supplies were running low.

Heuningvlei proved to be a delightful old-world settlement with a permanent population of around 100 people. We were again housed at three separate locations, but congregated in the Backpackers’ Lodge (the converted schoolhouse) where the locals once again fed us very well.

After a hearty breakfast on Friday morning we watched the donkeys being rounded up and harnessed for the cart ride back to our starting point. This proved to take longer than anticipated, so we started walking and had got over the steepest part of the route by the time they caught up with us. Those who had elected to walk continued on foot until the end, whilst the rest enjoyed the rather bumpy and, at times, hair-raising ride. This last day was through wonderful Cederberg scenery with amazing rock formations all around us, and we could only wonder at the ever changing horizon. It was with a fair measure of pride that we greeted each other at the end, having successfully covered around 41 kilometres. Ian (the Radio) wondered why he had paid good money to endure such pain, Christine’s boots gave up the ghost when the soles came off, Colin spilt a fair amount of blood and Tricia felt faint, but in truth, they and the rest of us had a wonderful hike!

The last part of the tour was a visit to the Sevilla rock art site (apparently not too successful due to the heat and tired bodies) but by this time Renee’s cold had developed into a bad attack of bronchitis, so we had to leave for home. This meant that we also missed the night at Hebron followed by the rail-bike ride from Ceres to Wolseley, kindly arranged for Saturday by David. We we very disappointed, but sure that the rest of the group had a very good time.

At dinner in Clanwilliam

David wishing for his food

Mags and her salad

This says it all 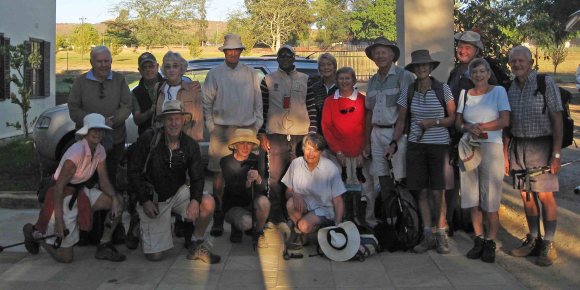 Our whole group on day 1

At the top of Pakhuis 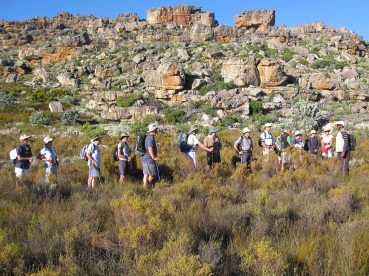 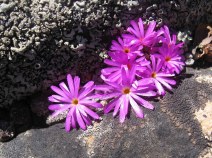 Bringing up the rear

Coming down the steep path 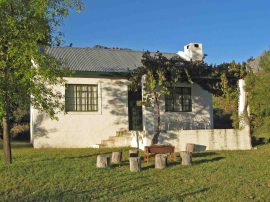 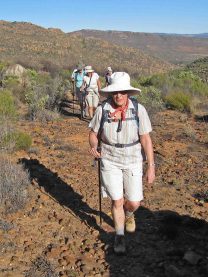 At the Block House

Spread out (walkers in red) 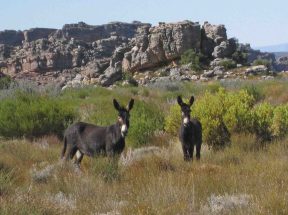 Near the end of day 2

A drover and his son

Waiting for the carts

Rocks along the way

One of the carts 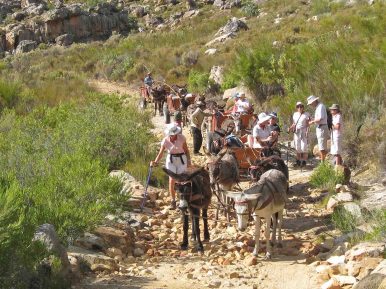 A stop along the track 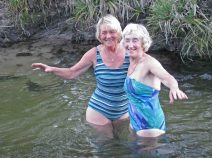 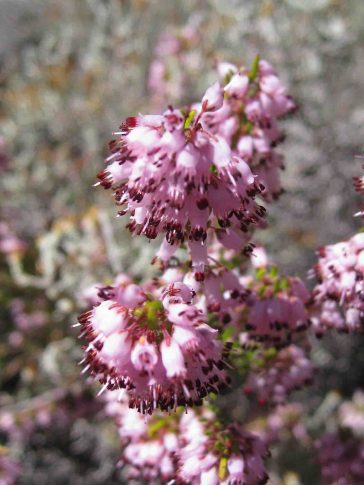 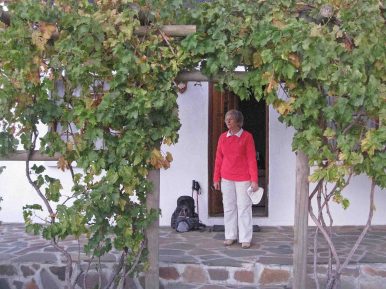 Renee outside her cottage 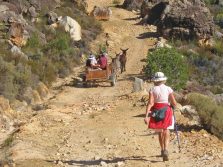 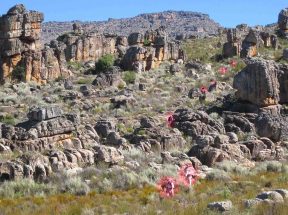 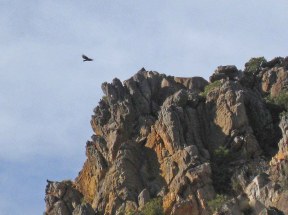 At the planning party