This morning Piet led 16 walkers on an interesting trail above Franschhoek.  We set off in a northerly direction from the top of the pass, in weather that looked threatening, with cold wind and damp cloud around.  Luckily it soon cleared and by the time we reached the Vista viewpoint, we could look down on the beautiful Franschhoek Valley with it’s neat farmlands and mountain backdrop.

From there we continued to the Lookout above the Wemmershoek Valley for even more spectacular scenery, this time in more pristine condition with no development other than the dam.  It was a fine destination and we enjoyed the break and the opportunity to just sit and take it all in. 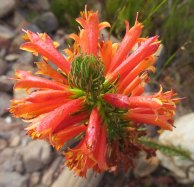 At the Vista viewpoint

On the way down

Renee and I spent Friday afternoon at Kirstenbosch Botanical Gardens, as we wanted to explore the new ‘Boomslang’ (literally translated as Tree Snake) aerial walkway which winds through a beautiful part of the forest, giving users a chance to get a bird’s eye view of a portion of the gardens.  It is a wonderful artistic construction and is proving to be very popular with vast numbers of tourists.  We loved it!

In the evening Andrew, Gillian, David and Tanja took us to The Seventh Floor in Observatory for a ‘One Ingredient’ dinner.  These are events hosted by Matt Manning and the ingredient, which is used in each course, changes each month.  For us it was cauliflower!  It was a wonderful occasion and we were treated to endless quantities of good wine from the Black Elephant Vintners.  This included a wonderful Sauvignon Blanc called ‘Two Dogs, a Peacock and a Horse’!

All the courses were well matched with different wines and we not only had detailed demonstrations of the food preparation, but were required to prepare two dishes ourselves!  Huge fun was had by all and we went away having had one of the most enjoyable dining experiences ever!

Renee in the canopy 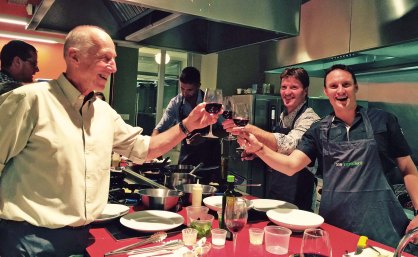 My team in the kitchen

On arrival at The Seventh Floor 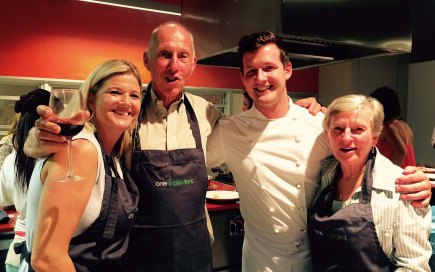 With our chef, Matt Manning

The other A team

Matt getting ready to do a demo

Only 5 walkers tackled the Genadendal Trail this morning.  On arrival there, we were shocked to find that the mountain was blackened by a recent fire, which, we were told occurred 2 months ago.  This was unfortunate, but did not deter us from our walk to Wonderklippe.  Luckily the weather was good and cool on the way up, although it warmed up considerably and there was no wind for our return.

The walk to Wonderklippe and back is 9 km and we climbed 600 metres.  The vegetation was obviously lacking, although there were odd patches of unburnt fynbos, with some nice examples of ericas to be seen, but they were few and far between.  It was interesting to see the effects of the fire, which must have been quite hot as evidenced by the burnt out boles of previously dead pine trees, with tunnels indicating where their roots had been.  Also of interest were the burnt out remnants of some of the ground proteas that abound in the area, notably Protea scabra, Protea decurrens and Protea cordata.  A few examples of the post burn occurring Mairia crenata were also in evidence.

There were few birds on the mountain, but we were thrilled to see a small party comprising Cape Rockjumper, Sentinel Rock Thrush, Familiar Chat and Cape Bunting at one location.  Other species seen were Red-Winged Starling, Neddicky, Cape White-Eye, Cape Robin-Chat and a Peregrine Falcon, as well as three African Fish Eagles on the road there.  We returned tired, but exhilarated by our outing.

Mist on the ascent

A small patch that was not burnt

The burnt bole of a pine tree

A camp for alien clearers on the way up 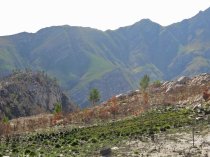 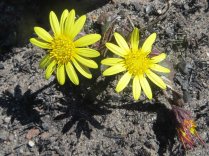 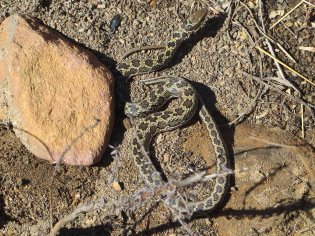 A Spotted Skaapsteker that survived the fire

The Chokka Trail comprises a series of walks in the area between Oyster Bay and St Francis Bay in the Eastern Cape.  Seven of us arrived at Oyster Bay Beach Lodge on Monday evening and the remaining three members of our party joined us the following morning.  Oyster Bay is a beautiful area and the views of the beach and rocky coastline were magnificent. 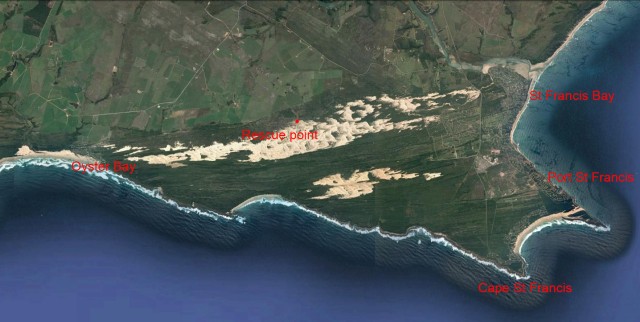 Our first walk was along the coast in an easterly direction, but it was hot and we did not make it to our destination, and turned around after 4 kilometres.  It was a good walk nevertheless and built up a good thirst.  Little did we know what was in store for us the next day!

For our second hike, we had two guides and we set out towards the Sand River full of enthusiasm, despite forecasts of very warm weather.  We soon realised that we were in for a tough day as the temperature soared and we found ourselves battling over high dunes in soft and very bright, white sand.  The Sand River is something of a misnomer as there was no river in evidence;  instead we were traversing the length of a longitudinal dune field stretching from Oyster Bay to St Francis Bay.  Conditions deteriorated and some members of the party were starting to feel physically stressed, so we called for help and engaged a rescue vehicle.  Before this arrived, however, the wind suddenly veered around to the west and picked up in speed and we found ourselves in a sand storm.  Luckily the temperature dropped about 5 degrees, thereby easing the physical stress considerably.  We ended up walking only 8 kilometres, but that was enough for most and we were glad to find comfortable new accommodation on the canals at St Francis Bay.

Before dinner, we enjoyed an interesting cruise on the canals and were all grateful to have an early night.

On Thursday we were taken to the coast, west of Cape St Francis, and walked from there to the point.  The weather had changed and it was cool with occasional showers, but we had a good walk and covered around 10 kilometres.  A visit to the Sancob Centre, near the lighthouse, gave us the opportunity to see the rehabilitation of stressed birds as well as the chance to adopt a penguin, which we christened ‘Koos’.  We again curtailed our walk and went straight to our next accommodation at Cape St Francis Resort.

Our last day, Friday, saw us exploring the Irma Booysen Reserve under the guidance of Dave, who was very knowledgeable and showed us many interesting and rare plants.  We finished our time together with drinks and a lunch in the club house at the beautiful St Francis Bay Links Golf Course.

It was an interesting trail, but perhaps not the best we have experienced, mainly due to the fact that it did not have a fixed start point and end point. 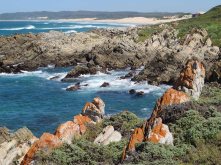 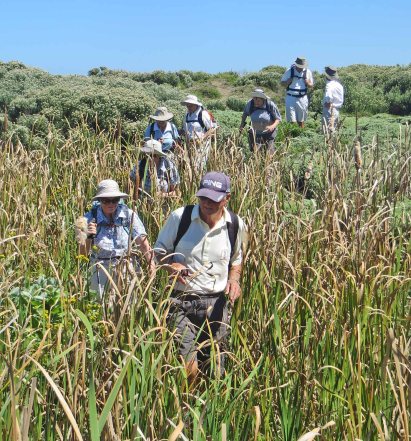 Is this the path?

Lunch on the beach 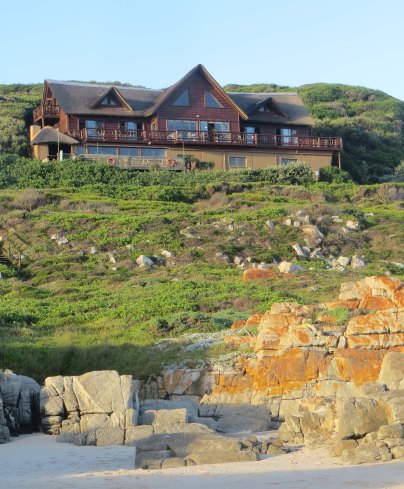 The start of the Sand River

Cruising down the river 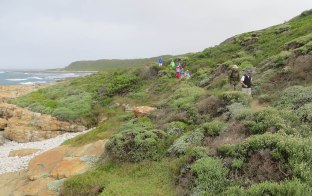 Setting out on Thursday

On the beach at Cape St Francis 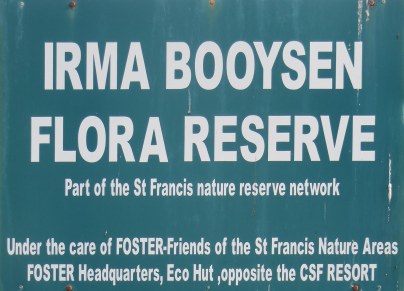 A Crowned Lapwing with eggs