There can be few pleasures that top a morning spent birding out in Walker Bay.  Walter took four of us out this morning and we had a really wonderful trip in his fishing boat.  When we set out there wasn’t a bird in sight, and pretty heavy swells and quite a bit of chop were the order of the day.  We wondered if we were on a wild Albatross chase!

Then we stopped about 3,5 km offshore and drifted. Walter had some sardines which he threw about and it wasn’t long before a Brown Skua appeared.  Within a short time there were about four of them around the boat and we had excellent sightings.  Then a couple of White-chinned Petrels appeared – also enjoying the chum.  Later they were joined by a few Sooty Shearwaters , whilst the odd Kelp or Hartlaub’s Gull dropped by.  Terns, both Common and…

After elections and social unrest, it was a pleasure to be on the mountain once again this morning.  We were at peace with the world and it reflected our enjoyment of our surroundings by providing perfect weather for walking.  There were only seven of us present – those who stayed at home missed a fine outing.

We stopped near White Rock for a snack and were watched by a pair of Cape Rockjumpers, which no doubt wondered what we were doing on their mountain, but they did not trouble us!  A White-necked Raven flew by, but was not interested in coming too close.  For the rest, there were no birds at all and we wondered why.  I had hoped to see Hottentot Buttonquail, Sentinel Rock-Thrush and Ground Woodpecker, but there was no sign of any of them!  We will just have to keep on trying!

Our outing lasted only three hours, but we returned having stretched our legs and exercised our hearts and lungs.  It was a perfect morning!

A quick visit to Intaka Island, whilst en route to Atlantic Beach, rewarded us with a few birds, but not the Little Bittern and Black-crowned Night-Heron that we were looking for. The pan section is dry, but the area around the hides remains full of water and birds, and it is a worthwhile place to spend an hour or two. 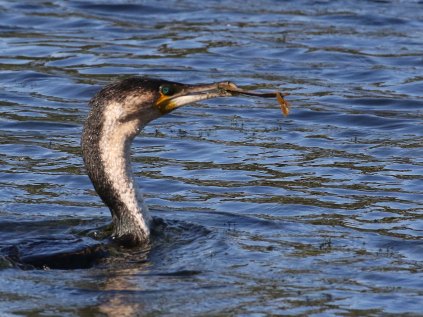 Our walk along the beautiful coastal path this morning attracted 16 Hurriers, who made the most of the perfect weather.  Our leader was Jenny and she had a hard time keeping the group together – in the end 13 walked to Gansbaai, three walked back from Gansbaai to meet us, 6 peeled off at Gansbaai and went home, and 10 walked back from Gansbaai to De Kelders and enjoyed a good meal at Coffee-on-the-Rocks!  Talk about a logistical nightmare – this had all the prerequisites!

The weather was superb – a real Autumn day with no wind and clear blue sky.  We could not have asked for anything better.  We are so privileged to live close to such wonderful amenities and be able to enjoy nature to the fullest!  Our walk was 8,6 km for the round trip, so we had some good exercise as well. 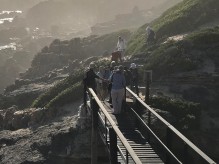