I have just seen this beautiful one-horned Cape Grysbok in our garden at Prestwick Village in Hermanus!  Little wonder that we struggle so to get things to grow.  At least we now know what eats most of our flowers!

Fourteen Hurriers set out for a walk in Fernkloof this morning, led by three of our venerable seniors (read ‘octogenarians’).  There was a fresh breeze blowing, hopefully the harbinger of rain later today, but they were not deterred, leading us around the face of Kanonkop and then Lemoenkop.

As usual, the mountainside was a treat to walk on with the fynbos giving us its seasonal crop of wild flowers, dominated by extensive growths of Ericas.

On the Klipspringer Path

Despite a strong wind blowing and gale-force winds forecast for later seven turned up at the Visitors Centre 08.00.  (Thanks to Robin for changing the time to a more reasonable hour).  Almost as soon as we started the wind abated and we walked in perfect walking weather – cool with some cloud, clearing later.

As our leader was not a keen botanist he kept the party going at a steady pace with minimum stops for photographs and lots of chatter.  We took just short of 2 ½ hours to the hut where we had a good break and as promised by the leader we were down in time for lunch.

On the way down we had a great sighting of a Klipspringer standing on a rocky outcrop above us, outlined against the sky.  At the bench on the top of Adder Ladder we sighted, close by, a further four that wandered off down the slope.

The four octo’s were equally between the sexes.  What can be said about the females octo’s collectively is that :

It was another fun day on the mountain enjoyed by all. 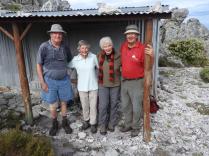 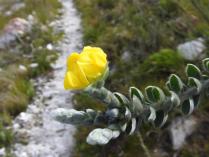 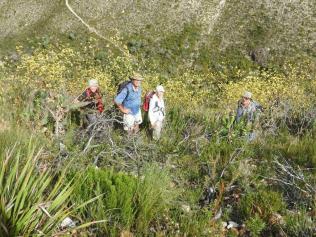